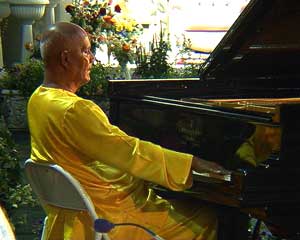 On February 18th, 2008 we can celebrate the 21st Anniversary of Sri Chinmoy’s spontaneous improvisational piano playing. At the end of each of his many concerts Sri Chinmoy often made the finale with a powerful piano or organ piece. Most of the time, the piano as well as other musical instruments help him to enter into a trance that connected him with his inner sounds. The results of his playing were most of the time extremely powerful and impressive. In one of his writings Sri Chinmoy says, “A piano has many keys. Each key has its distinct note or sound, a distinct individuality and personality. When the keys are played together, they don’t lose their individuality and personality but they act as a unit and create something really special. In an orchestra, so many instruments are being played, and each instrument represents or embodies a kind of individuality and personality. But when they are played together, they create such a divine atmosphere; they bring down Heaven on earth. If you take them separately, each one will have its own individuality, but it will not be able to achieve that Kingdom of Heaven on earth. So we expand and we strengthen ourselves when we mix together.”